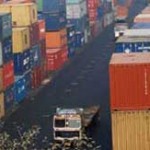 Engineering exports, a major chunk of total out-bound shipments, slipped 16 per cent to $5.8 billion in December due to slowing global demand. The figure for December 2014 was $6.9 billion, according to Commerce Ministry data.The overall exports of India contracted 15 per cent in December 2015 to $22.2 billion. The exports have been going downhill since December last year due to a global demand slowdown and drop in prices of commodities.