Election Commission to debut at this year’s Republic Day parade 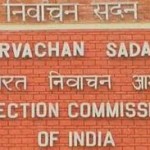 A tableau of the Election Commission and a marching contingent of the French army will be among the firsts at this year’s Republic Day parade with the Indian Army dog squad also slated to make a return to Rajpath.The French contingent, consisting of 100 French army personnel and 36 band members, will march on the 67th Republic day for the first time in history. Their position will be behind Param Veer Chakra, Ashok Chakra and Mahavir Chakra winners.