Home » Current Affairs » Economical with truth? Jaitley bats for NJAC and transparency but mum about RTI on political parties

Economical with truth? Jaitley bats for NJAC and transparency but mum about RTI on political parties

Economical with truth? Jaitley bats for NJAC and transparency but mum about RTI on political parties 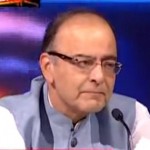 Last week Times Now held what it called ‘The National Debate on Legislature vs Judiciary’. The participants were the former Chief Justice of India Justice RM Lodha and the former Law Minister and the current Finance Minister Arun Jaitley and prominent lawyers Soli Sorabjee and Rajeev Dhavan. Arnab Goswami anchored the debate. A short excerpt from the transcript of debate, almost at the end, is given below.

Arun Jaitley (AJ): “Justice Lodha, if you were the Chief Justice today would you agree and appreciate if the recommendations made and the proceedings were all subject to the RTI?”

Arnab Goswami (AG): “But Mr Jaitley, equally, would you bring the political parties under the RTI?”

AJ (laughing): “Are you trying to work out a deal?”

AG (laughing): “One thing I have not been good at is trying to work out a compromise.”

Rajeev Dhavan (RD): “Arnab, the question is before the Supreme Court.”

Jaitley obviously did not give a clear response to Arnab Goswami’s question about political parties coming in the ambit of the Right to Information Act (RTI Act). It is clear from the comment and facial expression of Arun Jaitley that he was trying to evade the question. It is this evasion of the question that amounts to ‘economising on truth’. Let us see why.

A full bench of the Central Information Commission (CIC) ruled on 3 June 2013, that six national political parties, including BJP, were public authorities under the RTI Act as they fulfilled the conditions mentioned in Section 2(h) of the RTI Act which defines a public authority, and directed “the Presidents, General/Secretaries of these Political Parties… to designate CPIOs and the Appellate Authorities at their headquarters in 6 weeks’ time. The CPIOs so appointed will respond to the RTI applications extracted in this order in 04 weeks time.”

None of the six political parties complied with the decision of the CIC. A complaint for non-compliance was filed with the CIC. CIC issued repeated notices to all the six parties, which again included BJP, but none of the parties responded to these notices. There was also no response to ‘showcause’ notices.

Finally, on 16 March 2015, the CIC expressed its inability and helplessness in getting its own order complied with, saying “the Commission is bereft of the tools to get its orders complied with.” It also said the following:

“The respondents, as public authorities, have not implemented the directions contained in the Commission’s order and there is no evidence of any intention to do so;”

“(T)he complainants are at liberty, in view of the facts and circumstances of this case, to approach the higher courts for appropriate relief and redressal.”

It was following the last observation of the CIC that a petition was filed in the Supreme Court for declaration of the six national political parties, including Arun Jaitley’s party, as public authorities under the RTI Act. The Union of India was one of the parties to the petition.

Here comes the ‘economising on truth’ by Jaitley. On 28 August 2015, the Union of India of which Arun Jaitley is the Finance Minister, and a recognised legal expert, filed an affidavit in the Supreme Court saying interalia the following:

It is extremely difficult to believe that Arun Jaitley was, or is, not aware of the above developments, and the stands taken by his party and the government of the day.

It is of course true that Jaitley had not taken an oath to “tell the truth, the whole truth, and nothing but the truth” before participating in what he referred as an “academic” debate but why should he deliberately hide the truth is another matter altogether.

This substantial difference in what the Prime Minister says, what his Finance Minister does, and what the government does does not seem to be a step towards increasing trust…Read More