DTC to conduct trial of e-ticketing machines in buses 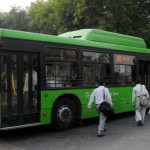 Delhi Transport Corporation (DTC) will introduce e-ticketing machines in some of its buses on a trial basis from January 2016.  Transport Minister Rai said that after installing ETMs in all buses by April -May next year, the government will move towards common mobility cards for travelling in both DTC and Metro, which will be done on priority basis. DTC will charge fares from passengers through ETMs in some of its buses on a trial-basis.

What is Car Free Day?

On November 22, the transport department had organised Car-Free Day in Dwarka area. During the event, Kejriwal had announced that Car-Free Day will be organised across the national capital and he would also cycle to his office that day. Read More