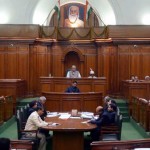 The Delhi Assembly today passed the Delhi Jan Lokpal Bill, 2015, which the Aam Aadmi Party (AAP) government has described as the “strongest” anti-graft legislation in the country.

The house cleared the bill with two amendments passed by the Delhi Cabinet on Thursday evening after some changes were suggested by activist Anna Hazare.

“A strong law is being brought. We will go to the Centre and the prime minster and urge him that the Jan Lokpal be passed,” Delhi Chief Minster Arvind Kejriwal said in the assembly. Read More