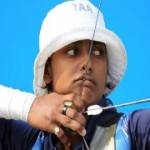 India’s ace women archer Deepika Kumari has won the Silver medal in recurve event at the 2015 Archery World Cup Final held in Mexico City. In the final match, South Korea’s Choi Misun defeated Deepika Kumari and won the gold medal by 6-2 score. This was Deepika’s fourth World Cup Final silver medal. Earlier she had won it after being runner-up at Istanbul (2011), Tokyo (2012) and Paris (2013) Archery World Cup Final. In this edition of World Cup, India won two silver medals with Abhishek Verma opening the account for the country in the compound section…Read More