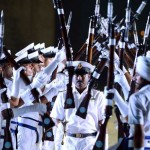 4th December, India is celebrating Navy Day to commemorate the contribution of our naval forces who protect the country’s maritime borders and are actively involved in disaster relief operations as well.

For a country which is surrounded by water from three sides and has a coastline of 7,517 kilometers, the role of naval forces is extremely crucial. Especially after the Mumbai 26/11 attacks, when the terrorists chose our coastline as an entry way. After this, a Sagar Prahari Bal (SPB) was formed in March 2009 to patrol the coastal waters. Read More