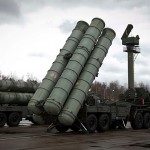 Decision in this regard was taken by DAC meeting chaired by Union Defence Minister Manohar Parrikar in New Delhi. DAC approval for defence deal comes ahead of Prime Minister Narendra Modi’s visit to Russia later in December 2015.

India would buy 5 units of the S-400 Trium air defence missile systems that are capable of destroying incoming hostile missiles, aircraft and even drones within a range of up to 400 km. Read More