Christine Lagarde appointed as MD of IMF for a second term 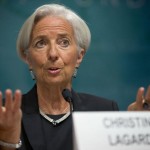 Christine Lagarde, who steered the IMF through some troubled times including the Eupropean financial crisis, has been re-appointed as its Managing Director for a second five-year term after an uncontested election.The Executive Board of the International Monetary Fund (IMF) on Friday selected 60-year-old Lagarde to serve as IMF Managing Director for a second five-year term starting on July 5, 2016, IMF said in a statement. The Board’s decision was taken by consensus.