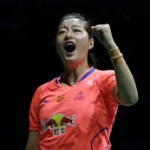 Chinese women’s shuttler Yu Xiaohan has been banned with a seven-month sanction from the Badminton World Federation (BWF) for an anti-doping rule violation at the 28th Summer Universiade in Gwangju, South Korea last year.Yu Xiaohan is a member of the China squad that won gold in the mixed team category at the Asian Youth Championship in 2011. She also won the women’s doubles title at the Singapore Open in April last year in the partnership with “Ou Dongni”.