China to land probe on dark side of moon in 2018 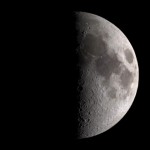 China has begun preparations for a new lunar mission in 2018. It has planned to send a probe to the dark side of the moon not explored by humans so far. The far side of the moon is never visible to Earth because of gravitational forces and has never been explored.

The Chang’e-4 probe will be the first mission in human history to embark on this expedition. China already boasts mature science and technology for sending a probe to the far side of the moon, and is open to cooperation with international society.