China officially abandons its One Child Policy by passing law 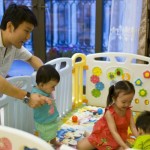 China has officially ended its one child policy, signing into law of a bill allowing all married couples to have a second child as the country attempts to cope with an ageing population and shrinking workforce. The change, which was announced in October by the ruling Communist Party, takes effect from January 1. All married couples will be allowed to have a second child but the legislation maintains limits on additional births.

The one-child policy, instituted in the late 1970s, restricted most couples to only a single offspring and for years authorities argued that it was a key contributor to China’s economic boom and had prevented 400 million births. Read More