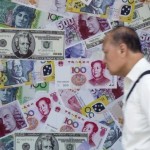 China’s central bank cut interest rates on Friday for the sixth time in less than a year, and it again lowered the amount of cash that banks must hold as reserves in a bid to jump start growth in its stuttering economy.

Monetary policy easing in the world’s second-largest economy is at its most aggressive since the 2008/09 financial crisis, as growth looks set to slip to a 25-year-low this year of under 7 percent.

Yet underscoring China’s drive to deepen financial reforms, which many believe are necessary to invigorate the economy, the People’s Bank of China (PBOC) said it was freeing the interest rate market by scrapping a ceiling on deposit rates.

The change, which Beijing had promised to deliver for months, will in theory allow banks to price loans according to their risk, and remove a distortion to the price of credit that analysts say fuels wasteful investment in China.

China’s policy loosening came a day after the European Central Bank said it could give a bigger policy jolt to the economy as soon as December to fight falling prices.

“We’ve got half the world’s central banks in easing mode,” said Joe Rundle, the head of trading at ETX Capital in London. “And we’ll probably see more easing from China to come.”

The reserve requirement ratio (RRR) was also cut by 50 basis points for all banks, taking the ratio to 17.5 percent for the biggest lenders, while banks that lend to agricultural firms and small companies received another 50-basis-point reduction to their RRR.

The late-evening moves come just ahead of a high-level meeting in Beijing starting on Monday where senior Chinese leaders will thrash out the country’s economic blue-print for the next five years.

Investors in Europe took cheer and shares soared, while the Chinese offshore yuan fell against the U.S. dollar.

“In the next step, monetary policy … will be kept not too loose or too tight to ensure stable economic growth,” the PBOC said in a separate question-and-answer session.

It added that China’s current muted consumer inflation and falling market interest rates provided a window for the country to liberalize its deposit rates.

It has been a tumultuous year for China’s economy.

A summer stock market plunge and shock devaluation of the yuan in August roiled global markets and fanned fears of a hard landing, prompting Chinese leaders to take drastic measures to assure investors they have the economy under control.

Friday’s easing came minutes after Premier Li Keqiang was quoted on state radio as saying that China will make “reasonable use” of rate and RRR cuts to keep its economy growing at a reasonable pace.

Senior Chinese leaders do not usually comment directly on the country’s rate or RRR adjustments.

The cuts came in the same week as sobering economic data for the third quarter that demonstrated the daunting challenges faced by the country’s leaders, not least in achieving a growth target of around 7 percent set by the government.

Data released on Monday showed China’s economy grew 6.9 percent between July and September from a year earlier, dipping below 7 percent for the first time since the global financial crisis.

With Chinese imports tumbling for the 11th straight month in September and producer prices stuck in deflation for more than three years, some analysts say China’s policymakers have their work cut out.

“We’re still waiting for clear evidence of an economic turnaround,” analysts at Capital Economics said in a note to clients.

“We are retaining our forecast that benchmark rates and the reserve requirement ratio will both be cut once more before the end of the year, with a further move in both early in 2016.”…Read More