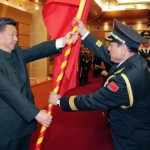 China has created three new military bodies as part of reforms to modernise its military and improve its fighting capacity.

State television showed on Saturday President Xi Jinping giving military flags to the leaders of the three new units — a general command for the People’s Liberation Army, a missile force and a strategic support force. Mr. Xi and PLA officers and soldiers sang the national anthem at the inauguration ceremony on Thursday. Read More