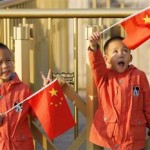 China, on November 2, has approved plans for a 58.41 billion yuan (5.97 billion pounds) high-speed rail project which will be used during the 2022 Winter Olympics in Beijing. The 174 kilometre-long railway, which will connect Beijing with the northern city of Zhangjiakou in Hebei province, will be constructed over a four-and-a-half year period and will be able to ferry 60 million people annually.

Beijing beat Kazakhstan’s Almaty in July to host the 2022 Winter Olympics, making it the first city to be awarded both the summer and winter Games.

About Origin of Olympics:-