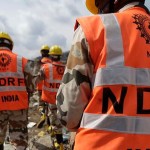 The Committee examined the proposals based on the report of the central team that visited the affected states hit by severe natural disasters.

A high-level meeting for Central assistance to states affected by natural disasters was held in in the national capital under the chairmanship of Home Minister Rajnath Singh and attended by Finance Minister Arun Jaitley, NITI Aayog Vice-Chairman Arvind Panagariya, Agriculture Minister Sanjeev Balyan and other senior officials. Read More