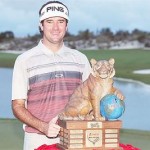 Two-time Masters winner Bubba Watson carded a six-under 66 in the final round to clinch the Hero World Challenge even as India’s Anirban Lahiri put on a disappointing show to finish last at tied 17th, at the Albany Golf Club here.

With his mesmerising play and cool putting, Watson finished on a total of 25-under 263 to stay well clear of last year’s winner Jordan Spieth, who ended fourth behind Patrick Reed (second) and Ricky Fowler (third).

Watson one of the few left-handers on the PGA Tour — registered his sixth top-five finish in last 10 worldwide starts. He had back-to-back birdies three different times yesterday, at the par-3 second and par-5 third, the par-5 sixth and par-4 seventh and on the first two holes of the back nine. Read More