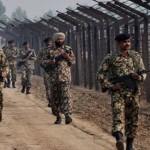 Border Security Force (BSF) has launched ‘Operation Cold’ along the international border in Rajasthan covering Sriganganagar, Bikaner, Barmer and Jaisalmer that will continue till January 30. The Operation Cold was launched to contain any infiltration or intrusion from Pakistan in fog and cold wave weather conditions in the western desert. The Operation that was scheduled for January 17 has been preponed in view of the Pathankot terror attack and the high security alert in the country ahead of the Republic Day. As per the exercise, extra BSF jawans have been deployed at sensitive places and their round-the-clock drill has also begun in the border area.