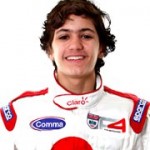 The curtain came down on the first round of the MMSC FMSCI National Racing Championship and the 2015 MRF International Challenge series in which Brazilian Pietro Fittipaldi clinched the title at the MMRT track in Sriperumbudur, near here today.Fittipaldi, the 17-year old grandson of former Formula One World champion Emerson Fittipaldi, enjoyed a fruitful weekend as he won two of the four races which earned him the required points to clinch the title with a tally of 244 points while Colombian Tatiana Calderon finished second (199), just eight ahead of Nikita Troitckii of Russia (191).