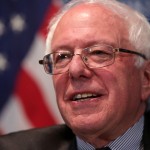 Vermont senator Bernie Sanders introduced legislation on Wednesday that would end the federal prohibition on marijuana, removing the drug from the federal government’s list of the “most dangerous” substances – a move that distinguishes the Democratic presidential hopeful from the other candidates in the race.

Under Sanders’ plan, marijuana would not automatically become legal. Rather, states would have the right to decide whether or not they want to legalize the drug – without fear of federal impediment. In effect, states would inherit the power to regulate marijuana in the same way state and local laws now govern the sale of alcohol and tobacco. Read More