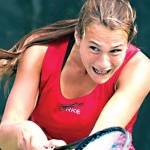 Aryna Sabalenka of Belarus has defeated Viktoria Kamenskaya of Russia in straight sets to win the singles title in the USD 25,000 NECC-ITF women’s tennis tournament at the Deccan Gymkhana, Pune. The 17-year-old Belarussian fired booming returns and broke Viktoria five times during the course of 6-3 6-4 victory in the final to pocket USD 3,920 as winner’s prize (Rs 2.60 lakh), only the second title of her career.

Aryna’s only other title triumph was at the USD 10,000 ITF Women’s tournament in Antalya, Turkey early this year, where she also won the doubles title. Viktoria, who dabbles into coaching after injuries plagued her in the past, said it was a conscious decision to make a comeback as a player. Read More