Bangladesh dismisses IS role in blast

Bangladesh dismisses IS role in blast 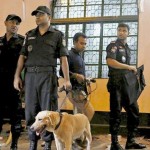 After two recent killings of foreigners and Saturday’s blasts in a Shia Muslim shrine in Dhaka, all reportedly claimed by the Islamic State, the Bangladesh government on Sunday said the terror group does not have an organisational presence in the country.

The reported claims of the IS that they were behind the attacks can be “a propaganda or have different motive,” said Home Minister Asaduzzaman Khan Kamal.

The Minister’s remarks came a day after monitoring group SITE Intelligence reported that IS had claimed responsibility for Saturday’s bomb attack that targeted a gathering of Shia Muslims in Dhaka. The blast killed one person and left 87 injured.

“We are becoming victims of a conspiracy. Some other terrorists may be doing this,” the Minister told journalists after a crucial meeting of the parliamentary standing committee on the home ministry Sunday.

He expressed confidence in completing the investigations and identify the “real culprits.”

The chairman of the parliamentary standing committee, Tipu Munshi, meanwhile said the murders of the two foreigners and the bomb attack were connected. “All these are connected by the same thread. Domestic and international conspiracies are behind these incidents, to destabilise the country.”

Police on Sunday filed a case under the Anti-Terrorism Act in connection with the blasts and formed a three-member probe panel to look into the incident.

On Sunday, the police arrested two BNP leaders — former MP Dewan Mohammad Salahuddin and Mayor Refat Ullah of Savar —in the outskirts of Dhaka. They have been arrested in cases filed over arson during the BNP-Jamaat alliance’s violent anti-government agitation. It was not immediately known whether the arrests were linked with the Saturday’s blasts in Dhaka…Read More