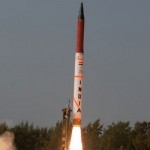 In pre-Diwali fireworks over the Bay of Bengal, India on Monday successfully tested the nuclear-capable Agni-IV ballistic missile, which has a strike range of 4,000-km, from the A P J Abdul Kalam Island (formerly Wheeler Island) off Odisha coast. The user trial by the tri-Service Strategic Forces Command (SFC), which saw the two-stage missile being fired from a mobile launcher at 9.45am, met all mission parameters, said DRDO officials.

The country’s most formidable missile, the over 5,000-km Agni-V, in turn is slated to be tested in January-February. While the Agni-I (700-km), Agni-II (2,000-km) and Agni-III (3,000-km) have already been inducted by SFC, the Agni-IV and Agni-V are currently undergoing developmental and user trials before their induction can take place in another two to three years. Before Monday, the Agni-IV had undergone one failed and four successful tests over the last five years, with the last one being conducted in December 2014.