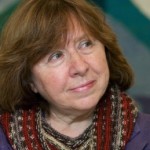 Author Svetlana Alexievich of Belarus has been selected for prestigious 2015 Nobel Prize in Literature. The Swedish Academy has selected Svetlana for her polyphonic writings, courage and a monument to suffering. With this she became 14th women Literature Laureate and she is also the first writer from Belarus to receive this award.

She was born on 31 May 1948 in the Ukrainian town of Ivano-Frankivsk. She had studied journalism at the University of Minsk between 1967 and 1972. Read More