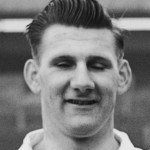 Capped 37 times by his country and first Australian to play in an FA Cup final, Marston has been in frail health for some time Australian football icon Joe Marston has died at age 89.

The Socceroos defender was capped 37 times for the national team between 1947 and 1964 and became the first Australian to play in an English FA Cup final in 1954, when his side Preston North End lost to West Bromwich Albion.

He died early on Sunday of natural causes having been in frail health for some time. Read More