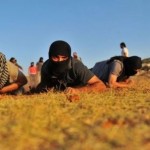 The bill, approved by both sides of the upper house late on Thursday, is one of several measures introduced to fight violent extremism.

At least 90 Australians are believed to be fighting with militant groups such as the so-called Islamic State.

About half of them are thought to be dual nationals. Australia is increasingly concerned about the impact on its domestic security of those who support or fight with militants in the Middle East. Read More