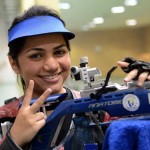 In a lively final, it was Anjum Moudgil who led throughout before she stumbled with shots of 9.6 and 9.9 that left her clutching the bronze medal.

Apurvi had a 0.4 point lead over Geetakshi before the last two shots. Apurvi responded with shots of 10.0 and 10.6, while Geetakshi delivered the first shot that was not a 10 in the final.

“I was nervous initially, but I settled to shoot a good final. I am very happy with the medal, as I did not expect anything”, said Geetakshi. Read More