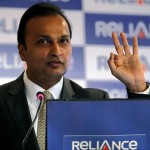 Reliance Defence Ltd has signed an accord with the Andhra Pradesh government to set up a naval facility along the country’s eastern coast with an initial investment of Rs 5,000 crore ($748 million). Reliance Defence, a unit of billionaire Anil Ambani’s Reliance Infrastructure Ltd, plans to build submarines and aircraft carriers as well as to provide services including maintenance and refitting of ships at the facility. It will be located 70 km south of Visakhapatnam in Andhra Pradesh.