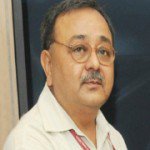 Senior IAS officer Alok Rawat became first male person  to be appointed as member of National Commission for Women (NCW). His appointment fills the fourth seat in the five-member body that seeks to review the constitutional and legal safeguards for women. Alok Rawat is 1977 batch IAS officer of Sikkim cadre. Prior to this appointment, he had served at various senior level posts at different Union Ministries. He had served as Director (joint secretary) in Union Ministry of Defence and Union Ministry of Road transport and Highways. He also had served as secretary (UPSC) and secretary (Coordination and Public Grievances) in the …Read More