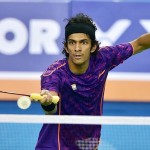 Ace Indian shuttler, Ajay Jayaram has won the 50000 dollar 2015 Dutch Open Grand Prix badminton tournament. In the title clash played at Almere in Netherlands, Jayaram defeated Estonia’s Raul Must by 21-12, 21-18 score. With this victory he deafened this title which he had won earlier in 2014. In October 2014, Jayaram had won his maiden Dutch Open GP title and was the first Indian to win badminton Grand Prix tournament under the new 11×5 scoring system.

This is second achievement of him in this season after he had won silver medal in 2015 Korea Open Badminton tournament in Men’s singles category. Read More