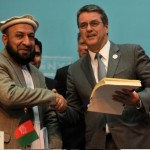 Afghanistan has become the 164th WTO member and the 36th least developed country (LDC) to join the global trade body after 11 years of negotiations. The landlocked Asian country expects to reap the benefits of the WTO membership for its post-conflict reconstruction. Now Bhutan is the only SAARC member which has so far not joined the multilateral trade body. Read More