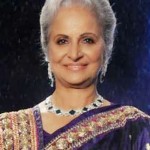 Veteran actress Waheeda Rehman was honoured with a special award for her contribution to the film industry as curtains came down on Yashwant International Film Festival. The 6th Yashwant International Film Festival-2016 is a joint venture of Yashwantrao Chavan Pratishthan and Pune Film Foundation. The festival was organised from January 22 to 28 and around 60-65 movies were screened. While 22 films were showcased in the category of Global Cinema, 14 in Kaleidoscope, six in Latin America, six in Country Focus, five in Retrospective, besides five Marathi movies and seven films of Hector Beveko. Presenting the award, NCP MP Supriya Sule said that Rehman always portrayed the role of a dignified lady in her career.