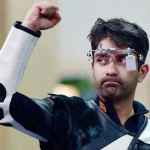 Ace Indian shooter Abhinav Bindra has clinched gold medal in the men’s 10 metre Air Rifle event of the Asian Air Gun Championships held in New Delhi. Bindra shot 208.3 points to settle at first position ahead of Kazakhstan’s Yurkov Yuriy (206.6) who is current world number eight and Yu Jaechul (185.3) of South Korea. In this event, India’s Gagan Narang was placed at fourth position with a score of 164.5 points. While another Indian, Chain Singh placed at seventh position of after notching up 122.7 points. It should be noted that, Abhinav Bindra had won gold in 2008 Beijing Olympics in 10 metre Air Rifle event becoming first Indian to win individual gold in the prestigious games. Gagan Narang had won a bronze in the same event in 2012 London Olympics. Read More