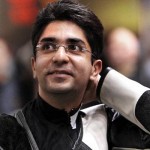 Olympic champion Abhinav Bindra has been awarded the Diploma of Honour and President’s Button by the International Shooting Sport Federation (ISSF) as an acknowledgment to his “contribution as an athlete” to the sport. The 33-year-old Beijing Olympic gold medallist was bestowed the honour by ISSF President Olegario Vazquez Rana on the sidelines of the Asia Olympic Qualifying Competition at the Dr. Karni Singh Shooting Range, New Delhi.

Rifle ace Bindra is gunning for glory at the Rio Olympics, having already secured a quota for the country at the quadrennial extravaganza. He said his Olympic preparation is headed in the right direction. He was hopeful of India sending a bigger team to the 2016 Olympics than the one that travelled to London nearly four years ago.