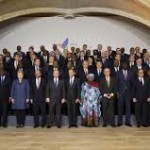 The 2015 Valletta Summit on Migration was concluded on 12 November 2015. It was held for two days at the Mediterranean Conference Centre in Valletta, Malta. It was attended by around 65 heads of governments/high level policy makers from Europe and Africa, besides officials from the UN and various organizations of the European Union.The summit, in addition to approving a political declaration reaffirming commitment to solve the ongoing Mediterranean Migration Crisis; came up with an Action Plan to deal with migration from Africa to Europe in a comprehensive manner…Read More