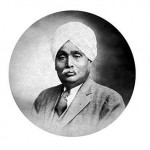 Prime Minister Narendra Modi paid rich tribute to great freedom fighter Lala Lajpat Rai on his 150th birth anniversary (January 28, 2016). Born in 1865 in a village in Punjab province, Rai, was one of the tallest figures in the Indian Independence movement. Popularly known as the ‘Punjab Kesari’, he was part of the ‘Lal Bal Pal’ trio. He died in Lahore, a few weeks after sustaining serious injuries during a non-violent protest against the Simon Commission in 1928.

Founder of Dayanand Anglo Vedic (DAV) institute Lala Lajpat Rai made a great contribution in the field of education. His famous quote: Milk for the infants; Food for the adults; Education for all.