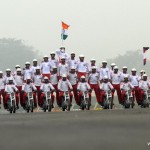 Indian Army Day is being observed every year on 15 January in India. This year it will be the 68th Indian Army Day. Significance of Day:

This day inspires the troops to continue to enrich the glorious traditions of the Indian Army with their dedication and sacrifice.