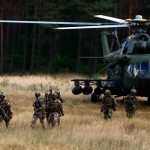 The US military has launched the largest NATO airborne drills dubbed as Swift Response 15 since the end of the Cold War to enhance security and stability in the European region. Swift Response 15 will be month long simultaneous multinational airborne operations drill in which around 5,000 soldiers from 11 NATO member states will participate. Key facts 11 NATO member courtiers participating are: Bulgaria, Germany, France, Greece, Portugal, Netherlands, Italy, Poland, Britain Spain, and United States. Read More

Union Tourism Ministry will soon confer the title of ‘Twin National Heritage Cities’ on the temple towns of Rishikesh and Haridwar. This will be the first instance in the country in which tag is being given to any of the cities. Both heritage cities will receive funds which have been earmarked for the development. Under the Twin National Heritage Cities, development plan has been proposed to develop two cities as world-class yoga and spirituality centres. The first priority of this development plan is to improve the infrastructure and traffic situation in these cities. Read More

Uttar Pradesh Minister of State (MoS) for Parliamentary Affairs Chitranjan Swarup passed away in Delhi. He was 70 and died after a prolonged illness. He was a sitting MLA of Uttar Pradesh state assembly from Muzaffarnagar constituency, belonging to ruling Samajwadi Party. In the current UP government led by Chief Minister Akhilesh Yadav, he was holding various portfolios including Urban Development, Urban Employment & Poverty Alleviation, Water Supply, Muslim Waqf and Overall Urban Development and Minority Welfare and Haj. Read More

Bangladesh novelist Zia Haider Rahman has won James Tait Black award 2015, UK’s oldest literary prize for his first novel, In the Light of What We Know. His debut novel’s story is based on an investment banker in a lead role who receives a visit from an old friend and addresses a whole range of issues including Afghanistan war, the rise of Muslim fundamentalism and global banking crisis. He received this prize at the 2015 Edinburgh international book festival along with Richard Benson who had won this award for his novel The Valley: A Hundred Years in the Life of a Yorkshire Family in the biography category. Rahman was born in the Sylhet region of rural Bangladesh. Later he had migrated to United Kingdom. Prior to shifting to writing career, he had worked as an investment banker and a human rights lawyer. Read More

Reserve Bank of India granted ‘in-principle’ approval to 11 applicants to start payments banks. The Committee of the Central Board (CCB) of RBI has selected 11 entities among the 41 applicant who has the reach and the technological and financial strength to provide service to the customers and promote government’s initiative of financial inclusion across the country. The selected applicants are: Reliance Industries Airtel M Commerce Services Tech Mahindra Vodafone m-pesa Aditya Birla Nuvo Department of Posts. Read More

State run insurer, Life Insurance Corporation of India (LIC) has launched its maiden unit linked insurance plan (ULIP) product across the country. The ULIP which is also called as ‘New Endowment Plus’ offers investment-cum-insurance provision during the term policy providing dual benefit for the policy holder. Specifications of ULIP: It provides dual benefits of risk cover and investment opportunity in market to the policy holder and also provides option of partial withdrawal under this plan. ULIP provides four fund options to policy holders in form of — bond fund, balance fund, secured fund, and growth fund to which policy holder can switch over according to their conveniences. Read More

aryana Chief Minister has signed an MoU with the Connecticut-based firm United Technologies for setting up a facility to manufacture air conditioners in Gurgaon and to expand its operations in Haryana. As per the MoU United Technology will set up its air conditioner business unit “Carrier” in eight acres land in Gurgaon which expects to generate 2,000 jobs in the state. This MoU was signed by Haryana CM on his maiden nine day tour to US and Canada with the business delegation which will end on 24 August. Haryana Government has scheduled nine-day tour to US and Canada under  which Haryana Chief Minister will visit New York, Washington D.C., San Francisco, Vancouver and Toronto and will seek investments in IT, Renewable energy, Services, Manufacturing sector. Read More

8. Centre announces 30 per cent tax sop for industries in Bihar

On 20 August 2015 Central government announced 30 per cent income tax rebate for establishment of new manufacturing plants and machinery in 21 ‘backward’ districts of Bihar. In order to give boost to economy and to attract new manufacturing units in 21 backward districts of Bihar Finance Ministry announced this special concession for five years under section 32 of the IT Act. 30 per cent income tax rebate: As per Finance Ministry notification 15 per cent additional depreciation on previous 20 per cent and 15 per cent investment allowance for new plant and machinery on previous 15 per cent will be added under section 32 of the IT Act. Read More

Former Olympic champion Sebastian Coe from United Kingdom has been elected as President of International Association of Athletics Federations (IAAF). In the election for this post he defeated Sergei Bubka of Ukraine by securing 115 votes. He succeeds Senegalese Lamine Diack who had led the IAAF for 16 years since 1999. He becomes only the sixth president in the organisation’s 103-year history. About Sebastian Coe He is one of UK’s finest sportsmen and has won 2 gold medals in the 1500m at the 1980 and 1984 Olympics. Read More

Union Government has constituted a three member panel to assess the situation over the student protest in Film and Television Institute of India (FTII) in Pune. The three member panel has been constituted by Union Ministry of Information and Broadcasting (I&B). It will will be headed by the Registrar of Newspapers (RNI) S M Khan and  comprise of two officials from I&B Ministry. The panel will submit its report on the situation in FTII to ministry. Background FTII students have been on strike for the last 69 days against the appointment of BJP member and TV actor Gajendra Chauhan as the chairman of the prestigious institute. Students are alleging that Mr. Chauhan isn’t qualified to head the institute. Read More

11. Lenovo to make Smartphones in Chennai with Flextronics under Make in India initiative

On 18 August Finance Minister Arun Jaitley launched two funds the India Aspiration Fund (IAF) and SIDBI Make in India Loan for Enterprises (SMILE) under Small Industries Development Bank of India (SIDBI) in line to carter funding for start-ups and to aid small enterprises in India. SIDBI under the first fund India Aspiration Fund (IAF) would invest in venture capital funds for meeting the equity requirement of MSME start-ups and for this the initial corpus of Rs. 2,000 crore has been set. Life Insurance Corp. of India (LIC) will be a partner and co-investor in this fund. Under second fund the SIDBI Make in India Loan for Enterprises (SMILE) is a debt-fund which will carter soft term loans to MSMEs to meet debt-to-equity norms and pursue growth opportunities, SIDBI has set Initial corpus of Rs. 10, 000 crore under SMILE fund. Read More